There is no doubt that Periscope is exploding right now. Viewers are watching 40 years worth of videos per day! 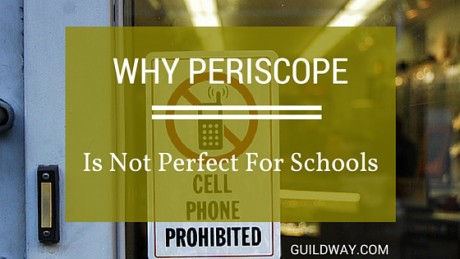 Just recently, I published a list of the reasons why teachers need to be excited about Periscope. I wasn’t lying when I published that list about the huge potential that it offers schools.

Yet, for all of its value, Periscope is not perfect for schools. I have used a lot of different technology tools and have a good idea about what works for tools in the classroom. There are some aspects to Periscope that teachers should be aware of before diving in the live-streaming deep-end.

I have put together my initial thoughts on Periscope as it currently exists. I have only used Periscope a handful of times but I thought this list might be helpful when considering its use. Some of these thoughts are technical and some are more about its use by both teachers and students.

Why Periscope Is Not Perfect For Schools:

1. Unknown Content. I used Periscope to globe trot right from my living room. Pretty cool, right? Well, for the most part, yes. However, there were a couple of times that I clicked on a feed and found that the video was vastly inappropriate. The point here? Just be careful. I wouldn’t want to go clicking around to different feeds while connected to a projector in front of 30 students.

2. Privacy. Students now have a chance to live-stream anything happening in the class. Sure there was always the potential for students to film using cellphones, but they then had to take the second step of uploading it to a site; Facebook, Instagram, Vine, or Youtube. There was a second thought process for students. They had to ask themselves “Is this right to put online?” There is no second thought process for students using Periscope. With Periscope there is only one thought; “This is going online, right now, live.” Periscope offers a good opportunity to have a conversation with students about privacy and digital citizenship.

3. One-Way Video. I know that one-way video is the point of Periscope but it still has limitations to its classroom use. We can broadcast our class or our sports but there is no way to “Skype” another class or use the app to meet with experts in the field.

1. Chat Management. The comments from viewers come really quickly. If someone is trying to Periscope, it would be difficult to manage both in-person questions and questions being asked over the app. The comments scroll up as new ones come in. Not to mention that the comments fade as well. So if there are 4 or 5 viewers commenting, it is really hard to keep up. There is a way to ban commenters but not easily.

3. Front-Facing Camera. When Periscope first starts up, the default is to use the front-facing camera. To rotate the camera, you have to click on the screen twice. Not a huge headache but it did take a while to figure that out on my own. It would be nice to be able to set rear-facing as a default setting.

4. On screen-timer. Us teachers are always obsessed with managing time. It would be nice to have some sort of timer on the screen to let us know how long it has been. Sure we could look at our watch or wall clock. Periscope is meant to interact with the viewers, not distracted by trying to find a clock in the room.

The age of digital media is upon us in the classroom. Embracing tools like Periscope only help our students connect with each other and the larger world. Yet, not all teachers are early adopters and if a company like Periscope (Twitter) wants to stay relevant to education, they need to make the app as user-friendly as possible.

There are other competitors as well. Another live-streaming app is called Meerkat with a fast growing user-base. Live-steaming will be another tool for schools, but which one is going to be the go-to service? Competition is going to bring a lot more features and functionality to these apps. This means that the tools we can use are about to get a lot more interesting!

Questions: Does seeing this list change your thoughts about using Periscope? Are you currently using it for your school? What do you think of it? Let us know in the comments.