The new app, Periscope, is going to greatly expand the possibilities of your teaching! 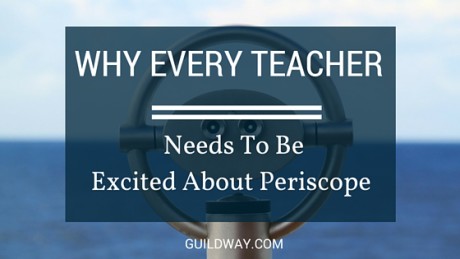 Periscope is a tool that allows every teacher and student a way to connect with the world like never before. If you have used it before, feel free to scan down to my benefits.

Periscope has become big in the past year mainly because it is a part of Twitter. If you are not a Twitter user you might have missed it. Periscope is simple but powerful because it only does one thing: live video broadcasting.

Think of Periscope as a personal TV broadcasting app. It allows you to record with a smart device and broadcast the feed world-wide. If you have ever used Skype or Google Hangouts, this is similar. The one main difference is that the Periscope stream is live and possibly anyone in the world can view it.

How Does It Work?

Now, I said it was like Google Hangouts and Skype but there is a slight difference: the video feed only goes one way. Meaning, viewers can see the Scoper, the person broadcasting. However, the viewers don’t have their camera’s turn on.

Viewers can participate by commenting about the video live. The Scoper and all other viewers can see the comments and interactive live. Viewers can express a like for what they see by tapping on the screen; producing a floating heart. The more viewers tap, the more hearts appear.

Well, a lot. Over one million people joined Periscope in the first 10 days alone. For Scopers, it is really a mixed bag. I have viewed a bunch of different feeds and have been surprised every time. I have seen a woman streaming a storm rolling in over Ireland. I have seen American musician John Mayer play the guitar. When I was at ISTE, I did a Periscope interview with MJ Madda from EdSurge.

What that means is once you click on the feed you could be looking at anything. Consider yourself warned!

Here is the key question for teachers: how is this going to change your class? Why do you need to be excited about Periscope?

3 Benefits of Periscope For Your Class

1. Explore Globally: For a history teacher, this is AWESOME. Teachers and students can instantly tap into what is happening in the world. Want to travel to a cafe in Turkey? Been there. Want to see a concert in Britain? Seen it. There is no more middle-man. No news agency. If there is a major event happening, check out Periscope. Someone is probably filming it live.

2. Ultimate Sharing: Our students do awesome things all the time. Sports, art performances, creations. Now you can do a quick periscope feed and interact with viewers globally about what is happening. Students and teachers both can learn how to interact and engage with an audience. All the while showing off their awesome work. It is also great for sharing school events with the community.

3. Voice: Congrats! You just got, for free, the world’s largest microphone. Think about it. Every single student or teacher with Periscope can send out a live feed to anyone in the world. Instantly. We often talk in education about student and teacher empowerment; Periscope is it.

How You Get Involved: 2 Ways

Because it only exists as a free application, you will need to download it through the Apple or Play store.

When connecting, you can use Periscope in connection with your Twitter account. Just head over to Periscope.tv for the details.

Second, is if you don’t have Twitter. You can create a Periscope account by using your cell phone number.

My Recommendation: If you have a choice, use Twitter. My reason is that each time you scope, you can push a notification to your Twitter followers in an effort to gain a larger audience.

You might still be hesitant to use it. I understand! Why not test it out?

On Tuesday, September 1 at 2:15, I will be talking about the first day of school for teachers. You can follow on Twitter or Periscope @LinaneJr. I will also be using the hashtag #EduScope.

Questions: Have you used Periscope? What do you think of it? If not, how do you see this affecting your classroom?