Pokemon Go isn’t a fad. It isn’t going away quickly. It is the beginning of something big. Something that is not going to just happen on student cell phones outside of class. This is a game that has introduction millions to the possibilities of augmented reality (AG). Your students are among them. So lets answer the basic questions, what is Pokemon Go and why does augmented reality matter?

Have you played Pokemon Go yet? I have. I started playing just to show my young son. Ok, that is a lie. The truth is that I am a 31 year who was intrigued by the game. Augmented reality was too tempting of a lure. I have played for about a week and I have to say, so far, it is impressive. Back in 2013, I tried an augmented reality app called Ingress. Same basic idea as Pokemon Go but the game had a different narrative and virtual environment. Come to find out, the developer of Ingress was also the developer of Pokemon Go. Duh. 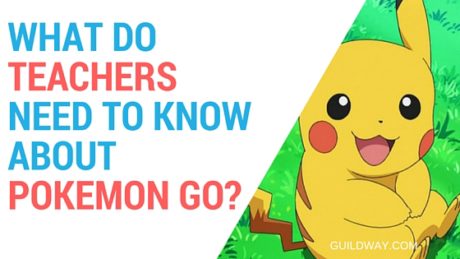 What Is Pokemon Go?

Pokemon Go is a mobile app that has players catch Pokemon. It was released on July 6th, 2016 and there are literally millions of people playing. Pokemon Go has grown so fast, it has already surpassed Twitter, Tinder, and Snapchat in daily users, and its users have higher engagement rates than users on Facebook.

Pokemon are the cartoon animals/monsters(Pokemon is short for “Pocket Monsters”) that originated from a cartoon in the late 90s. Pokemon have been around a while and have already appeared in different video game, card game, and video mediums. There were Pokemon games for the Nintendo DS and their characters are pretty recognizable in the Nintendo universe. The most recognizable is probably Pikachu. Make no mistake, most students will have an idea of what Pokemon is about, even if they have not played the game them-self.

Side-Note: There are “Pokemon” but no “Pokemons”. While it is kind of funny to say, “Pokemons”, it will make you sound like the out-of-touch relative at the family party.

If Pokemon have been around for a while, what makes this game any different? The central difference is that this is game is an augmented reality. Players don’t just interact with the game. As players conduct their daily life, the GPS on their phone allows for interactions between the game and the physical world.

What Makes This Game Augmented Reality?

As players move in the physical world, your character on the game moves around too. Think of it as driving a car and seeing the car in the Google/Apple Maps app. The world is moving around you as you move.

When a player encounters a Pokemon in the app on their phone, the camera is used to form a background. It is like the Pokemon is right there in front of the player. The player then uses the app to throw virtual Pokeballs at the Pokemon trying to catch it. Sometimes they are caught, sometimes they escape.

Also, when players travel to different notable locations like fire stations, ice cream shops, or the Holocaust Memorial (yeah…), they appear in the game as Pokestops. Players that visit these locations gain items and bonuses to help them progress in the game.

Lastly, there are locations that are marked as Gyms where players can compete for control of the Gym by battling their Pokemon against other players. Players need to physically be at the gym to complete. Unfortunately, for one guy, his house was marked as a gym.

What Does This Have To Do With Learning?

The ways augmented reality affects learning is a completely separate post but the truth is that millions of our potential students are playing. Most of those students are, for the first time, experiencing awesome and engaging augmented reality. They are interacting in the game at physical places. It is a blending of physical and virtual worlds that has never been this big.

There is no going back from this. This is not going to go away like Flappy Bird. Flappy Bird was a game, AG is an experience.

Can you use Pokemon Go for learning?

Maybe…Smarter teachers and I are going to find ways to use the app but that isn’t really the importance of the game. The importance is that those millions of players now see the possibilities for AG, not to mention companies. Millions of people are now looking around and considering what other  apps, tools, and experiences can (should) include augmented reality.

Teachers are already using apps like Aurasma. Also, Google Expeditions just arrived this summer. Both are ways for teachers to use augmented reality. Aurasma is cheap but, unfortunately, clumsy to work with. Google Expeditions cost so much, it instead might be cheaper to fly your students around the world.

Now that more companies see how big the market is for augmented reality, it will become increasingly mainstream. More apps, more tools, and greater expectations. Students will now be expected teachers to use augmented reality to enhance learning and to heighten engagement.

The future looks bright for augmented reality and its is now up to us educators to figure out how to best use it to help students learn.

Questions: What do you think? Are you curious about Pokemon Go? Have you tried it? What are your thoughts about the future of augmented reality and learning?