If you aren’t showing interactive videos to your students, they probably aren’t watching them. Interactive videos offer countless opportunities to engage, interact, and assess students without disrupting the video.

Over the years, I have shown dozens of history documentaries or film clips of varying length during class. Only once or twice have I shown a documentary lasting for 60 minutes. Most are under 30 minutes and as short as 3 minutes. I don’t make them too long because students lose interest. I had a student ask me this year how long a film was, I said 20 minutes. He responded: “ugg…20 minutes is a long time.” Yeah. It seems my students just can’t appreciate the value of a good quality Ken Burns documentary. Every student, with every film I show, will eventually lose interest at some point during the film. When engagement drops, learning stops. You need to be showing interactive videos. 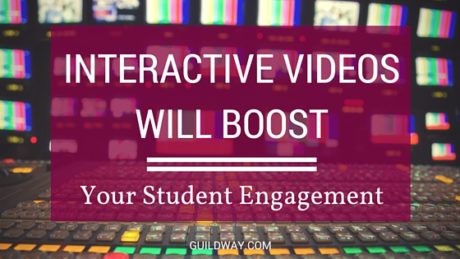 Did You Catch That? — Life Without Interactive Video

My solution for years to boost engagement was simple. Give the students a worksheet on the film. The worksheet questions could only be answered by paying attention during the film. Brilliant, huh? When I observed students not writing down the answers during the film, I would grow impatient. I would then start to announce the questions. I would shout things like “Question 3 is coming up!”. If they continued not answering the questions or were missing them, I stopped the film and answered it for them.

I can’t imagine trying to watch a film and having someone stop it every 3 minutes to answer a question. As the teacher, stopping the film makes perfect sense but it makes for a horrible experience for the viewer/student. I was basically forcing them to watch the film not because the film had something to teach them. With my worksheets, my plan was to force them to learn under duress.

The worst part of my forced video questions? I didn’t realize a student didn’t understand something until the end of the film. In the worst cases, it wouldn’t be until they left the room and I got a chance to look at their responses to the questions.

Conversations During Videos — The Need For Interactive Videos

Technology allows for us to have more engaging and interesting experiences when watching films with students. Whenever there is a major television event…and sometimes when it isn’t even that major…viewers will talk about it on Facebook, Twitter, or Snapchat. This is called backchanneling. It is an ongoing conversation as people watch.

I tried having the students backchannel with Today’sMeet during a couple of documentaries. It worked really well with 12th graders in my American Politics class. It worked horribly in my 9th grade World History class. With my 9th graders, I set it up a Today’sMeet to be like a conversation on Twitter. I put the questions into the chat as the film progressed. My goal was to have students watch and discuss the film as it happened. It didn’t work out that way. It was hard for students to follow the film, look for the questions, answer the questions in the chat, respond to others, and then ask their own questions. It was a bit too much.

At one point during the documentary, the chat on Today’sMeet devolved into a string of silly, off-topic comments. The whole experience got so much worse once students started with puns and memes. Yeah…I’m not doing that again.

What A Difference Interactive Video Makes

An Interactive video tool will allow you to take your film and do a number of awesome things with it. I used Zaption this past year and students loved it!

I was able to:

With interactive video, student engagement is up. Learning increases. Win-win.

Note: Don’t try to hunt down Zaption. It shut down in 2016. I am working on a follow-up post that will help you pick a replacement tool to use when designing interactive videos.

Question: What strategies/tools do you use to boost engagement when using film during class?